Structure of the AKD derived from palmitic acid

Alkyl ketene dimers (AKDs) are a family of organic compounds based on the 4-membered ring system of oxetan-2-one, which is also the central structural element of propiolactone and diketene. Attached to the oxetane ring of technically relevant alkyl ketene dimers there is a C12 – C16 alkyl group in the 3-position and a C13 – C17 alkylidene group in the 4-position.

The main application of alkylated ketene dimer is in the sizing of paper and cardboard, as well as in thhydrophobization of cellulose fibers. The products thus modified are distinguished by higher mechanical strengths and less penetration of water, inks, or printing inks.[1]

AKD’s feature hydrophobic alkyl groups extending from a beta-propiolactone ring. A specific example is derived from the dimerization of the ketene of stearic acid. This ketene is generated by pyrolysis of stearoyl chloride.[2] AKD’s react with the hydroxyl groups on the cellulose via esterification reaction. The esterification is competitive with hydrolysis of the AKD. Prior to the development of AKD’s, hydrophobicity was imparted by incorporating rosin into the paper.

Related to AKDs, is alkenyl succinic anhydride which is another substitute used in sizing applications (ASA). As for AKDs, ASA reacts with hydroxy groups of the cellulose to form an ester, anchoring the hydrophobic group to the surface. ASA is prepared by thendne reaction of unsaturated hydrocarbons with maleic anhydride.

A continuous process in which long-chain carboxylic acid chloride and tertiary amine (e. g. dimethyl isopropylamine, dimethylcyclohexylamine or triethylamine) is supplied separately without solvents to a tube reactor, kneader or preferably a twin-screw extruder or planetary roller extruder and reacted at temperatures between 90 and 110 °C, delivers lactone contents of over 90% at short reaction times. Processing is carried out by phase separation or acidic extraction.[19]

The problems with the acidic (aluminum sulfate-mediated) mass sizing of paper with alkaline-digested colophony resins introduced since the early 19th century led beside the use of alkaline flocculants (such as chalk or calcium carbonate as the alkali reserve) to the search for alternative materials for sizing in a neutral or alkaline environment. In addition to the significantly more reactive alkenyl succinic anhydrides (which do also hydrolyze rapidly in the presence of water) alkylated ketene dimers were preferred surface and mass sizes in the paper industry from the 1960s onwards.

Industrially applied AKDs are derived from fatty acids with chain lengths between C14 (myristic acid) to C22 (behenic acid); palmityl (C16) diketene and stearyl (C18) ketene and mixtures thereof are preferably used, as well as fatty acid mixtures from the hydrolysis of animal and vegetable fats. Because of the chain length of the original fatty acids, AKD are waxy solids with melting points between 42oC and about 70 °C. Mixtures of alkylated ketene dimers and water are dispersions at temperatures below 40 °C or emulsions at temperatures above 45 °C. Liquid AKDs are widely used, they are based on unsaturated fatty acids like oleic acid or branched fatty acids, like iso-stearic acid.

Aqueous alkyl diketene dispersions generally contain 10-20 wt% of AKD, as well as active protective colloids (particularly polycations such as cationic starch, copolymers of N-vinylpyrrolidone and quaternized N-vinylimidazole, acylated polyethyleneimines or cationic high molecular weight polyacrylamides with an average molar mass up to 7 million g/mol) and other stabilizers (usually anionic surfactants, for example, lignin sulfonates or condensation products of naphthalene-sulfonic acid sodium salt and formaldehyde). Such stabilized AKD dispersions are active and stable at room temperature for up to three months and also tolerate the addition of different fillers for paper or cardboard (e.g. kaolin, chalk, talc, titanium dioxide, calcium sulfate, aluminum oxide, etc.) from 5 to 25%. The amounts of alkyl ketene dimers used for the sizing of paper and paper products are preferably in the range from 0.15 to 0.8 wt%, sometimes from 0.05 to 0.2 wt%, based on the dry paper stock.

For paper sizing with AKD, a three-step process was proposed which, despite controversial discussions in the 1990s, seems to describe the processes that are taking place.

Decisive criteria for the quality of the hydrophobicity of papers are

The molecular structure (i.e., molar mass and cross-linking degree), the molar charge density of cationic groups, the exact dosage of the cationic polymer as a dispersion stabilizer and retention aid as well as keeping the other process parameters such as temperature, pH and residence times is crucial.

follows the cracking of the stabilized AKD particles on the base paper mass, the melting of the solid AKD wax (at approx. 90 °C), the spreading of the liquid AKD wax by surface diffusion on the cellulose fibers, and the formation of closed hydrophobic layers. The thickness of the hydrophobic layers depends on the AKD concentration in the dispersion.

Ad 3. The hydrophobization of cellulose fibers with alkylated ketene dimers takes place most effectively in neutral or preferably weakly alkaline media (pH 7.5-9.0). The reaction temperature is generally 90-110 °C, with approximately 40% of the AKD used reacting with the cellulose. After the reaction contact angles of >100° are measured, indicating the hydrophobic character of the AKD-modified model surfaces. The esterification of hydroxyl groups of cellulose fibers was also demonstrated by comparison reactions with 14C-labeled AKD.

The sizing with AKD is suitable for the permanent hydrophobization of newsprint, printing and writing paper and cardboard used as a container for liquids (including foodstuffs such as milk), as well as for the improvement of shape stability and runnability.

At Advance Chemicals, undergoing robust testing frequently, the production of AKD is strictly under defined and controlled conditions thus giving out world call AKD for application in various grades of paper making.

Want to join the discussion?
Feel free to contribute!

Advantages and Disadvantages of Silicone Defoamers 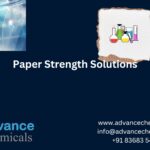